How To Avoid The Five Most Common Auto Insurance Claims

It's no secret that accidents happen all the time, especially over the road. With more distractions than ever impairing drivers behind the wheel, the chances of one happening around you or involving you are higher. To help inform and educate you on how to best avoid an accident, our experienced claims team has compiled a list of the most common auto claims we see on the regular, along with helpful tips for preventing the risk altogether. 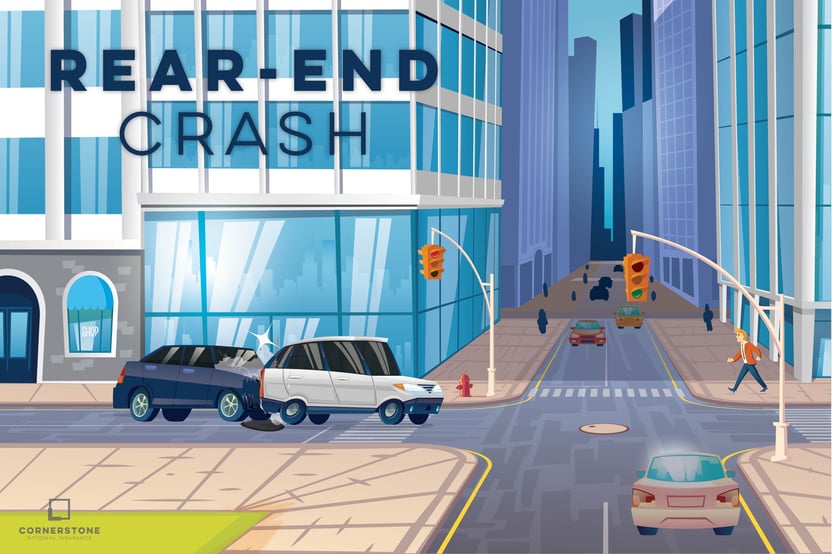 We've all been there: It's bumper to bumper traffic leaving work, and there's that one car behind you following a little too closely for your liking. Sure enough, a string of brake lights ahead causes you to slow down because you're paying attention, but the driver of the car behind you is face-down in their cell phone. Next thing you know, traffic stops, and your vehicle gets rear-ended by the careless driver who's not paying attention.

Another common cause of rear-end crashes here in the Midwest - AKA Storm Central - is severe weather. Winters can cause white-out and slick conditions on the road. And no matter how cautiously you drive under those circumstances, you can't control how the drivers around you react. The same goes for storm-induced heavy downpours over the road in the spring and summer. Often, reckless drivers will continue to speed or pass when it's not safe, causing a chain reaction of rear-end crashes to the drivers around them.

What can you do to avoid a rear-end crash? Practice patience and put down the phone.

As simple as it sounds, the main thing you can do to avoid being at-fault in this claim scenario is to leave plenty of space between you and the car in front of you. It's important to remember that following another car's tail excessively close doesn't mean you'll get where you're going any sooner, so just be patient. Wait until you have a safe, unobstructed path to eventually pass and get into a quicker-moving lane. Until then, don't risk being that guy - the too-close-for-comfort/phone-consumed driver mentioned in the first scenario above - that makes other drivers anxious and worried behind the wheel.

Be on top of the impending weather forecast and alerts in your area before hitting the road. Work or optional events just aren't worth risking your safety for. And as mentioned above, no matter how cautious you drive, others may not be on that same level when they take on the highway. Do your research on the best weather apps/radio stations available and set up notifications, so you have access to expert advice on whether or not it's safe to be on the road, given the upcoming conditions. We'll give you a headstart: Here are the Best Weather Apps of 2020, recommended by CNET. 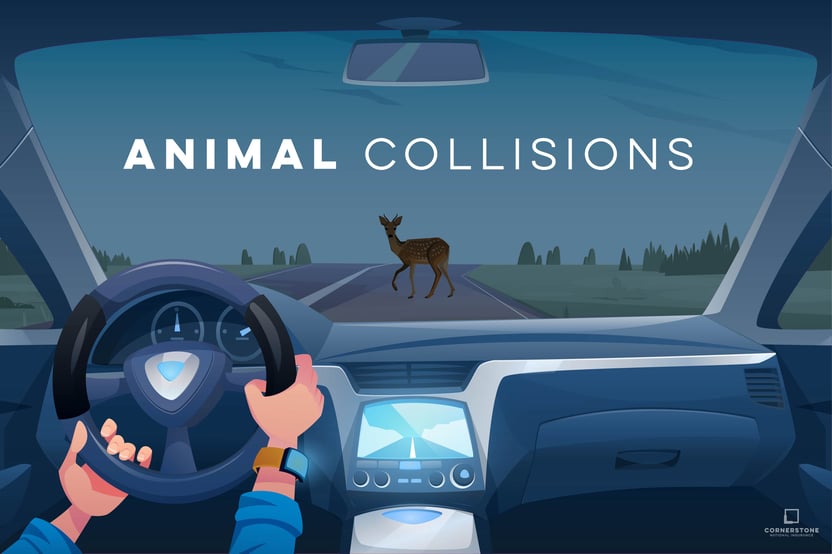 Why is it that forest critters seem to know exactly where we'll be and when we'll be there so they can strategically throw themselves into oncoming traffic? If you think that statement is largely directed at the deer population, then you'd be right (sorry, Bambi and friends).

Picture this: It's a foggy morning, and you're carefully driving to the office when a deer and its herd slowly appear to the right of the road. Before you can clearly identify them and hit the brakes, they rush out of the woods and into your path. Next thing you know, one tumbles across your hood and shatters your entire windshield. Then, you're not only left with a mess of a car but the lasting mental image of an injured (or worse) animal you certainly didn't mean to hit.

If this has happened to you, you're not alone. The Insurance Institute for Highway Safety (IIHS) estimates that there are more than 1.5 million deer-vehicle collisions each year, resulting in the deaths of more than 200 motorists, tens of thousands of injuries, and over $1 billion in vehicle damage. And the vast majority of deer-related accidents occur right here in the Midwest.

What can you do to avoid an animal collision? Practice defensive driving.

Aside from animal avoidance on the road, defensive driving can come in handy for many other scenarios, like encountering drunk drivers, distracted drivers, and poor weather. When trying to look out for pop-up deer sightings over the road, keep these tips in mind:

If you face a deer, don't freak out: 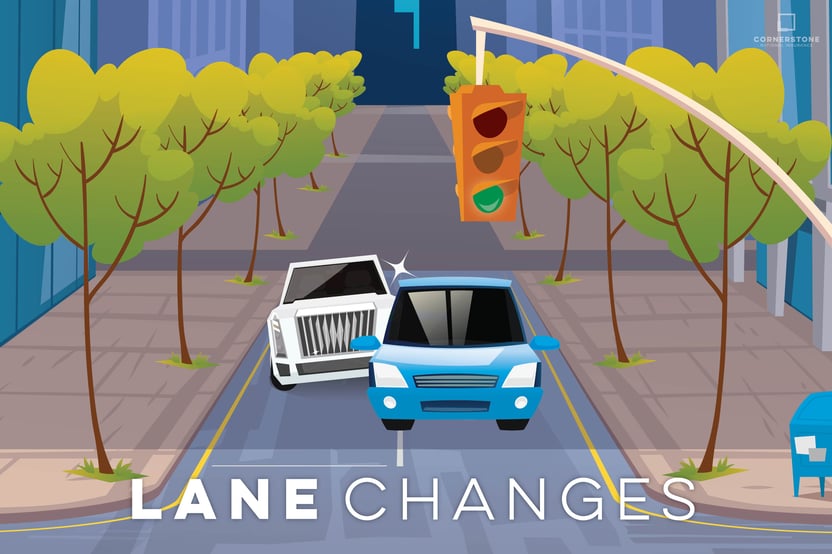 Have you ever used the phrase 'stay in your lane'? Well, turns out this catchy saying is also applicable to you when you're behind the wheel.

Unsafe lane changes can be as simple as changing lanes without signaling or by starting to signal after you began the lane change. Other common examples include:

What can you do to avoid unsafe lane changes? Utilize the helpful safety tools and accessories available to your vehicle.

Of course it's crucial to follow the basic "Rules of the Road" when changing lanes, like: always use your turn signals, don't cut another driver off, only change one lane at a time, don't change lanes at an intersection, keep your mirrors clean for visible blind spot detection, and only change lanes around dashed lines, not solid ones. But for added support, you may want to consider investing in some helpful technology.

Vehicle safety features and technologies have come a long way in the last decade. Now, there are plenty of systems available to drivers that will help them monitor their surroundings with minimal effort. The best part is, you don't have to have a new, fancy car with all the bells and whistles to access it. But, if you are in the market for a new car, consider buying one with the following systems:

An LDW system is an advanced safety technology that alerts drivers when they unintentionally drift out of their lane without a turn signal. It's important to note that LDW systems do not take full control of the vehicle or keep the driver from operating it.

BSD systems alert drivers with an audio or visual warning if there are vehicles in adjacent lanes that they may not be able to see. The alert helps facilitate safe lane changes. Check out this BSD system on Amazon that also features lane change assistance for less than $300.

Although our vehicles come equipped with top-of-the-line safety features and accessories, the 'ole "looking over your shoulder" trick still in fact works when determining if it's okay to change lanes or merge. Becoming too reliant on the tech built into our cars could unintentionally cause a decline in our ability to be alert drivers. 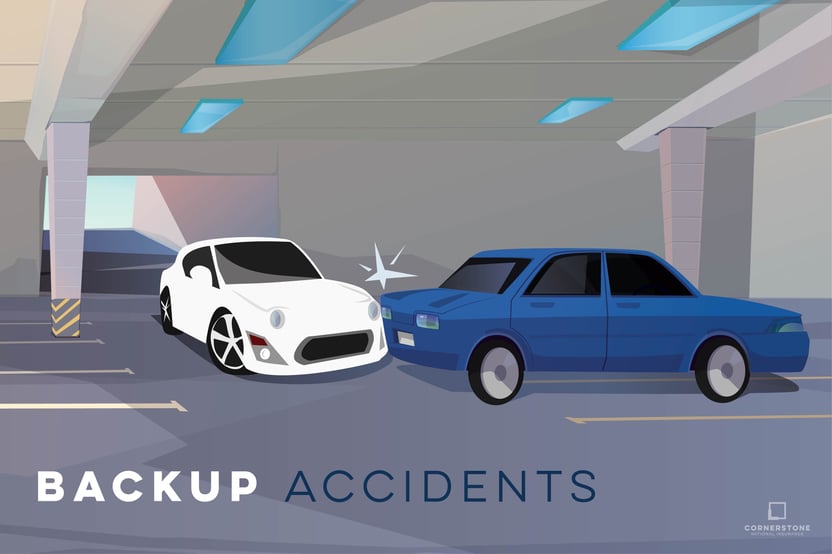 Parking lots and garages are a hub of activity in a relatively small amount of space. Add in all the emerging unique layouts, traffic patterns that vary by lot, bikers, and people walking on foot, and it's easy to see why accidents happen so frequently. Drivers quickly become distracted in a lot setting because they may be in a hurry to park, a hurry to leave, or in an act of pure desperation, attempt to snag that prized spot near the front and collide with another driver fighting for the same position - oops.

What can you do to avoid a parking lot accident? Install a backup camera with movement sensors.

Installing a backup camera in your vehicle might be the easiest way to ensure you don't back out into another car in the parking lot. An added bonus? It will help you park better than ever, aligning you right down the middle of your parking stall markings. Like the LDW and BSD systems, your car doesn't have to come with a backup camera; you can simply purchase one and install it yourself to keep accidents at bay. Many backup cameras also come with handy movement sensors to warn you when an obstacle is within a certain distance of your vehicle. Take a look at this backup camera system with built-in sensors from Amazon for just shy of $170. 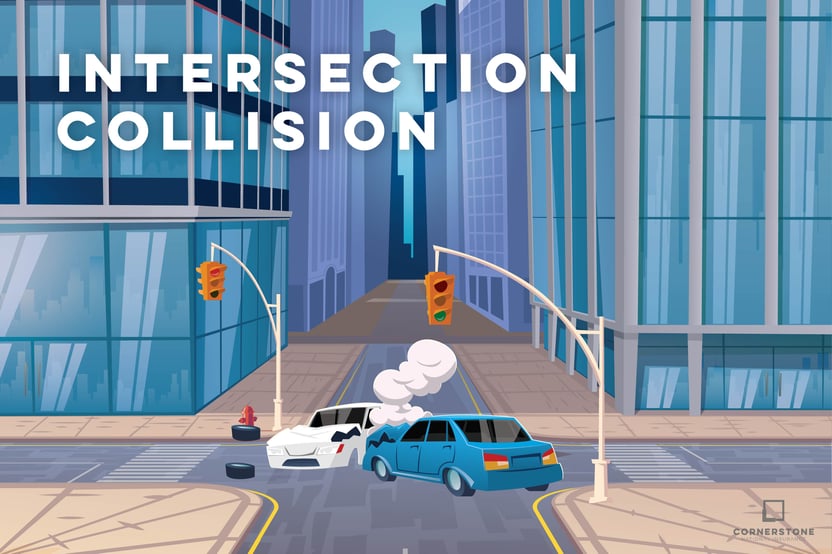 It's an all-too-common scene: A reckless driver failing to yield appropriately, racing through a busy intersection. This type of incident and the potential accidents resulting from it frequently happens in situations where:

According to the Federal Highway Administration (FHWA), 40 percent of all motor vehicle accidents and 20 percent of all fatal crashes occur at intersections. What makes these accidents different from many other types of crashes is that the injury victim often drives into the car that fails to yield, causing a "T-bone" impact.

What can you do to avoid an intersection crash? Don't let your guard down and make an effort to report dangerous, accident-prone intersections to the appropriate authorities.

You can't control drivers that operate as if they always have the right of way, but what you can control is your personal level of alertness and the consistent reporting of their dangerous activity. It’s common for drivers to let their guards down when traveling the same route over and over. But the truth is, everyone on the road — even the most seasoned driver — is susceptible to an intersection-related accident when they get too comfortable with their commute.

We can't stress enough how important it is to stay vigilant when you approach any intersection. Intersections aren't "basic" by any means these days. They're constantly evolving in layout and design to accommodate more traffic on the roads. So you have to adapt right along with them and keep an eye out for drivers who aren't doing the same. When you see irresponsible drivers repeatedly breaking the law at an intersection you frequent, take the initiative to report it to your state's Department of Transportation. Your concern and accompanying action could help put immediate safety measures in motion for the future, like traffic cameras, increased police presence, or a redesign of the intersection.

Additional Tip: Turn your radio down and your concentration up.

This tip is useful for any of these claims scenarios. There's nothing like cranking up your favorite tunes when you're out on the open road. It's actually a form of therapy for many. But when you approach a more congested area of traffic - including at busy intersections - turn down the music so you can better concentrate on your surroundings.

Being A Good Driver Pays Off At Cornerstone

Every time you get behind the wheel - whether it be to travel one mile or 100 - you are responsible for both safe driving and defensive driving to avoid these common insurance claims. If you do, you can find peace of mind in knowing you did your part to keep yourself, your precious cargo, and everyone else on the road that much safer. Plus, safe driving and avoiding claims can lead to big savings on your Cornerstone policy. Be sure to ask your agent about our Claims-Free Discount, if they haven't already added it to your policy.

Next Post
Just Grow With It: A Collection Of Lessons Learned About Adapting To Change And Staying Positive During Trying Times